On any given day, we’re exposed to a hell of a lot of advertisements.

I don’t know how many exactly – credible sources put the number somewhere between 250 and 3,000, so there’s a lot of wiggle room.

Fact is, standing out in advertising is getting tougher.

Not to be confused with World of Warcraft, or the popular (for nerds) pornographic movie, World of Whorecraft.

Back in my grandfather’s day, ads were both harder to create, more expensive to run, and harder to get in front of people than they are today.

These days, anyone with an internet connection and a few hundred bucks (or less, if they’re willing to settle for a DIY job) can put together an ad.

Long story short, to the average consumer, all this advertising is beginning to run together. And if you want to stand out, your advertising has to set you apart from your competitors in a big, brassy way.

Now, I’m not talking about creating a USP (unique selling proposition) here – while that’s something you definitely need to do, it’s probably not going to make your promotion stand out in the sea unless your company is radically different from any others out there.

Instead, what you need is a hook.. a big idea… a show-stopper.

Don’t bury it, either. Put it way up front – preferably in your headline. Make sure no one can read the first sentence of your deck copy (or even your headline) without developing an almost obsessive desire to read further.

Having trouble coming up with something?

That’s totally understandable. Hell, it happens to the pros more often than we’d care to admit.

But you know what I’ve learned?

The hook or “big idea” doesn’t necessarily have to be relevant to get your promotion to stand out.

Sure, it’s often bettter if you can find something that also builds desire for the product, but if nothing else you should be able to figure out an approach that gets people at least wanting to hear you and your company out.

But the fact is you can pull hooks out of even the most obscure details if you know what you’re doing. 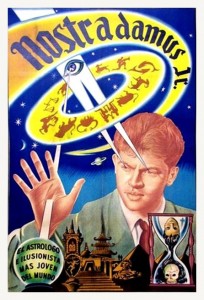 It’s like a magic trick… without the excitement, wonder, or scantily-clad vixens.

I once created a visitor value doing over 500% of the “average” metric simply by alluding to a “profit paradise” in the headline.

Another hugely successful promo I wrote was built around an interesting-sounding phrase I came up with when writing headlines.

And colleagues have run with seemingly-insignificant factoids at my insistence and made a bundle for their clients.

The funny thing is none of these hooks really had a specific benefit attached to them. But by writing them the way I did, I was able to make them sound like a big deal – and get them stuck in people’s heads.

I remember once I was shooting the breeze with a lawyer. He was telling me he had a criminal trial he had no idea how to win. The prosecution had pretty much everything they needed for a slam-dunk – DNA evidence, eye witnesses, motive and more.

So during his cross-examination, he asks one simple question to the officer on the stand…

“Did you fill out the evidence description form fully?”

The officer said no (it wasn’t a mandatory requirement). It had no bearing on the case whatsoever. And yet… the jury came back and gave this “obviously guilty” man a not guilty verdict in record time.

Look, it’s great if you have an obvious and powerful hook…

But sometimes, what you’re selling is very similar to a lot of what’s out there. You still need to stand out from the crowd, however…

And if you deliver your marketing message in the right way, even the most innocent details can push your business to the forefront of people’s minds over your competitors.

What “silly” marketing angle have you successfully used (or seen used successfully) that has resulted in a huge success?

This entry was posted in Uncategorized. Bookmark the permalink.